Inside and out, you’ve made a serious investment of both time and money in creating a beautiful home. Yet, if the sun makes your home uncomfortable, hot or fades your furnishings, all your efforts will be diminished. With 3M Prestige Window Films, you can enjoy the benefits of a world class window film while leaving the beauty of your home virtually unchanged.

Until recently, most window films that rejected heat were dark, used metal or were highly reflective. Over the years, various other companies have tried to create a clear window film with mixed results. While they were able to achieve improved performance their drawbacks made them unacceptable for most fine homes. Because these films used metal, they were susceptible to corrosion, especially in coastal environments, and interfered with mobile phone reception. Because the Prestige Series has no metals, they are the first films to offer a variety of selections that eliminates these problems and perform to the industry’s highest standards. With Prestige Series, your home’s exterior stays beautiful and from the interior, your view is as clear as your original window.

One of the major drawbacks of traditional window films is that they tend to act like mirrors. From the inside, traditional window films make it difficult to see outside, especially at night when interior lights are on. In the daytime, the outside reflection tends to give a home the look of a commercial building. This collection of four window films has substantially reduced reflectivity than the glass they cover. The other styles have interior reflectivity that is just 1% greater than glass. So, at night you’ll have a clear view out your windows. Your windows will only reflect  your commitment to keeping your home beautiful.

SUPERIOR HEAT REJECTION THROUGHOUT THE DAY

For most people, there are two primary reasons for installing window films: rejecting the heat to increase comfort and fade protection from damaging UV rays for furnishings. These films do both remarkably well. 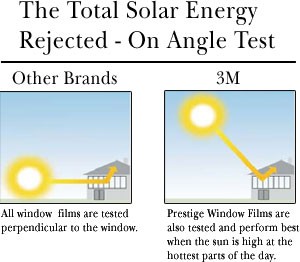 To measure just how impressive these films are, we created a more stringent test for performance: Total Solar Energy Rejected-On Angle. This test proves that our films are unsurpassed throughout day and especially during the hottest times when you need the help the most. So, when the sun is working hardest, our films are performing their best. While some  films claim performance, the fact is that their performance is only similar when tested perpendicular to the sun, which only can happen at the relatively cool times of sunrise and sunset. Our spectrally-selective films reject up to 97% of the sun’s infrared light to help keep your home cool and lower your energy bills.